The Past and The Pitcher 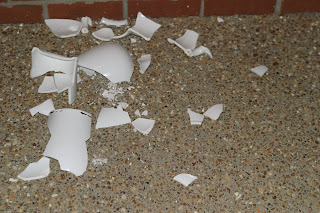 In one of my books on grieving the loss of a child, the author suggests smashing a piece of pottery as a form of therapy. 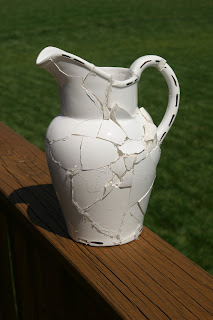 “Go down to the potter’s house, and there I will give you my message”  So I went down to the potter’s house, and I saw him working at the wheel.  But the pot he was shaping from the clay was marred in his hands; so the potter formed it into another pot, shaping it as seemed best to him…Like clay in the hand of the potter, so are you in my hand…Jeremiah 18:2-6
Angie
p.s. if you do this, I want you to send me pictures of your “new art!”
p.p.s.  My pitcher now sits in the middle of my kitchen table, constantly displaying the work of God for all who come to my home:)  Thank you for the mending, Lord.  I love You.