Let me start by saying how truly humbled I am that so many of you chose to share your babies with me by commenting on my last post.  I am not all the way through, because I am taking my time and praying for you as I go.  I wish I had a few more hours in the day so that I could contact each one of you and tell you how sorry I am in person.  I hope you will know that even though I am not able to do this, I care.  I am reading your words, and I am grateful for your vulnerability.
I couldn’t help but notice how many women commented or emailed me to tell me that they were mourning the loss of a baby through abortion.  Some were forced, and others were by choice.  I am willing to bet that if you read my blog, you could guess that I am pro-life.  You will also know that, even more important that my stance on any topic, I am pro-God.
Sisters, hear me on this. If you are one of these women, and you are carrying this burden with you as you travel through life, I want you to know that you are forgiven. Do not let the enemy torture you for one more day.  We all have things that we deeply regret, that we struggle with, that we wish we could do over.  The God I serve does not see me this way.  He sees me as pure and clean…through the blood of Christ.
Ransomed.  What a beautiful word.
As I type these words, I am thinking about the past week and what God has been teaching me.  I feel like He has been working on me, nudging me forward.  Part of moving forward is always letting go of what has held us back, and it is never less than a battle.  There are days in life where we are forced to come face to face with what it is that binds us, and for me, that is fear.
I am bound by fear.
I have talked about it before, and judging by the response I got, I am not the only woman who struggles with it.  It ebbs and it flows, and sometimes it seems to have disappeared, only to show up when I least expect it.  During the past few months, I have been watching my kids closely, trying to anticipate their reactions to Audrey’s death. Worried about the anxiety that may come to be a part of their lives as well.  I pray over them at night, and I watch their movements, their drawings, their response to strangers, their sleeping patterns, their eating habits…everything.
I want to know how they are processing this loss, and I have really started to notice some things that I am in prayer about.  Kate seems to be acting up more lately (and by “lately,” I mean “upon her exiting my birth canal”) and Abby seems to be making moral decisions that are more rebellious. She wants to test the boundaries.
Ellie, on the other hand…
Oh, my sweet Ellie.  I see so much of myself in her.
Let me back up a little so you can understand why this post has brought me to tears already.
Ellie is my mother hen (if you read this blog consistently, I promise the pun was unintended). She has tended toward worrying since she could see the world around her.  She wants to know where the war is before she goes to bed (apparently, according to Abby, it is in Kentucky.  I don’t know about that, but it satisfied Ellie). If Kate hits her, she lies and says it didn’t happen because she doesn’t want her to be punished.  She asks if everybody is wearing their seat belts when we get in the car.  She cries when she goes to Sunday School because she doesn’t want to be away from us.  One time, I overheard a bag rustling around in the dark pantry and realized it was candy when I heard a sweet four year old voice saying softly, “Get behind me satan.  I will not listen to you.”  I bought some of that stuff that makes your thumb taste bitter and I told them that they were going to have to stop sucking their thumbs.  Ellie routinely came in from another room and painted her own thumbnail, whispering, “I did it again” and then walked out of the room.
Seriously.
A few months ago, I walked out on the porch and saw her on our porch swing in a car seat.
You know, because porch swings can be dangerous.
Of course, I took a picture.  For those of you who ask about how I get all of these pictures, I will tell you.  I have a Go-Go-Gadget arm with a camera attached. 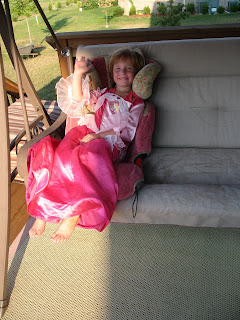 For the record, I also snapped one of Kate, who was trying to launch herself off the swing while screaming, “FFFFFFLLLLLLYYYYYYYYY!!!!!!!!!!!!!”  Also for the record, she eats the thumb stuff like it’s candy.  I am trying to figure out whether her taste buds are stunted or if she is radically defiant.  According to my father, she is what is commonly referred to as “payback.” The truth is, I wouldn’t have it any other way.  She is an amazing kid. 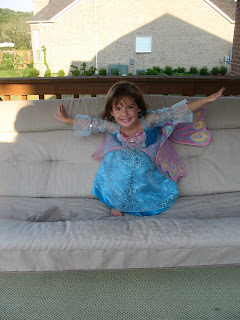 Back to Ellie.
We went to Destin this summer and visited this neat little shopping place that had all this fun stuff for kids.  My kids don’t really like to do the whole “ride” thing.  They have to be coerced to do anything that requires a few steps away from mommy and daddy, and it most certainly must stay attached to the ground.  Even Kate is not really up for adventure if it involves uncertainty. So when we passed by this huge apparatus that was charging $13 for a giant trampoline ride, I knew we had nothing to worry about.
Todd, on the other hand, decided that they might want to try it.  It was absurdly expensive, but I knew that they would NEVER go for it, so I smiled sweetly and told him it sounded like fun.
Kate? Maybe.
Abby? Seriously doubt it.
Ellie? I pictured myself as a flight attendant and decided that was a likelier scenario.
I handed over the debit card.
Let me describe the “ride” a little further.  It involved a harness and a man who acted as a rocket launcher while sending screaming children a little past Jupiter.
They waited in the line, and I watched as they got closer and closer.  Abby was up next.  She started to get a worried look on her face and looked at me.
“It’ll be so fun!!!!” I yelled to the platform.  It didn’t look like fun to me, but I didn’t want her to be scared, so I smiled and gave a thumbs up.
She started jumping and I saw her little face way up in the sky.  I guess I wasn’t completely shocked, but I was surprised.  Ellie watched with a look of horror, and her face was crumpled up in a mess of nerves.
“I’m scared.”  She looked at me. She was trying to read my face.
I didn’t want to say the first thing that came to mind because it felt weird to say, “Well thank goodness, because that thing looks like a torture chamber and I would rather gnaw off my own arm before I let that psycho launch me in the air.”
The whole arm thing seemed dramatic given the situation, so I opted for response “B.”
“I think it might be fun if you try it, El.  It’s not supposed to be scary, it’s supposed to be fun!!!”
You know how God whispers to you about 3 seconds after you give someone great advice that you yourself have been completely failing to follow?
What is she afraid of? That God will forget her in mid-air? That we will all pack up and leave while she jumps? That she will fall?
That God will forget me? That I will fall?
Last week, I had the pleasure of sharing a meal with an amazing woman named Gracia Burnham.  If her name sounds familiar, it is because she was the American missionary who was taken hostage for a year in the jungle and watched her husband die in the gunfight that saved her life.  They waited for over a year, trudging with her captors, praying for her children back in the States, begging for mercy.  They went through unspeakable hurt for months, waiting for someone to pay for them to be released. They were dirty, mistreated, hurt, humiliated. They were waiting to be ransomed.
If you talk to her about her experience, you will not sense fear, nor will you sense hostility. You will feel an indescribable feeling of forgiveness and peace, and above all, freedom. The kind of freedom that defies fear.
The kind of freedom that knows that ransom is not paid with money.
It was paid with blood.
If you believe in Him tonight, you will know what it feels like to trust completely in the One who holds you high above the discernible ground.  You know that it isn’t always perfect, and it isn’t always easy.  It is entirely possible that something will give way and you will fall, head first into the ache that is this life.
But on the other hand, you’ll never know unless you jump.
Which brings me back to my sweet Ellie.  She did cry a little, but she was determined to give it a try.  They put the buckles on her and she almost reconsidered.  She looked like she was about to back out of it, but before I could scream, “Refund,” I saw a look of determination come across her face.  It is probably not dissimilar to the expression that came across my face, years ago, as I told Him that I would believe. 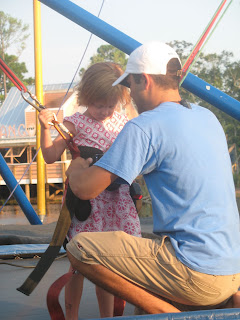 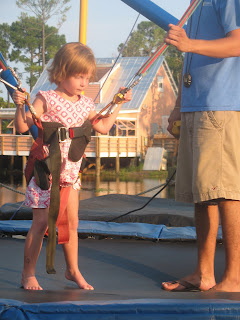 I could tell you in words what happened next, but it just wouldn’t be the same.
I have seen this image in my mind so many times in the past few months, and I want to share it with you tonight.  I hope it encourages you the way it has me.
It will forever be engraved in my mind as the moment when God whispered, “You have no idea what you would miss if you let this pass you by…”
Thank you, Jesus.  We are no longer captives… 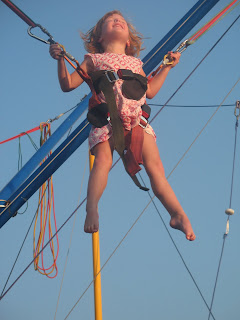 Blessings to you, friends.  And peace be with you wherever you are tonight…
Angie