I got an email from Todd last night titled “Our boy.” I had asked him to send me the information about our new sponsor child (we are sponsoring a little girl who I am praying I will get to meet on Friday, but right before we left I felt like we needed to sponsor another). I asked Shaun to have them assign me any child, and didn’t give any other specifics. I wanted to Lord to assign whomever He saw fit, and a few days before I left, I got the packet from Compassion. It was so neat to open it up and have no idea what to expect, and as soon as I saw Mohit’s picture I fell in love with his solemn little face and big eyes.

Today we visited our second Compassion Project, and as we watched all of the tiny kids reciting their school lessons and smiling at us, I was scanning the room to see if I could recognize his face from the picture. I didn’t see him, but I did see some of these precious little ones hard at work.

There was a large area where the older kids were broken into groups and doing various crafts, so we wandered in and started to play with them. It is so cool to see the way our team is put together because there is so much giftedness in all kinds of different ways. We all love to jump in, and it was such an amazing thing to scan a room full of faces and see each person connecting with the kids. Shaun and Keely were doing a mini-worship service with one group, Anne was getting artistic with another, Robin and Melissa were playing hand games with giggly little girls, and Pete was making frames with a group of boys.

I saw a little girl and a little boy come in together and as the little girl was introduced to Shaun and his wife Becky, I realized that the little boy behind her must be Mohit. His face was very solemn for such a five year old. Some of the teachers noticed me looking at him and then tapped him on the back and told him to come over to me. He looked up briefly and then began to walk over cautiously with his eyes to the ground. He is new to the program, and I think he wasn’t really sure who I was or why I was meeting him. There was a translator there and I asked her to tell him that I had a family at home in America, and that we would be praying for him and sending letters and drawings to him, and that I was so excited to meet him. He looked up at me again and then back down at the ground. I could sense that he just wasn’t sure what his response should be. He was the most precious child, and within moments, he completely captured me.

I couldn’t believe that I was sitting with a child that I will have the honor of sharing life with and seeing him grow in the coming years through Compassion. I would consider myself a skeptic about the way that “ministry organizations” work, and as dramatic as this will sound, something in me just clicked today. I got down on my knees so that I could be eye to eye with Mohit before I left, and through the help of his teacher, conveyed to him that he was a gift from God and that I was so excited to be a part of his life.

He nodded, eyes to the floor.

I told him that he was a smart boy, and that God was going to use his life in an amazing way.

His teacher smiled and said several sentences to him, and when she was finished, he looked up at me and his entire countenance changed. He smiled the slightest bit, and maintained eye contact as I asked her what she had said.

He got it that time.

And before I could wipe my face clean, I realized I had just found myself in the deep end of the water I have feared facing for so long.

It wasn’t a clever marketing scheme or a catchy slogan.

It didn’t look like a staged commercial asking for money.

It was the Gospel.

And it was sitting in my lap.

Trust me when I say that I could write for hours today about all of the things we saw and experienced. I don’t know that I could do it the kind of justice it deserves, because words fail me.

So I won’t tell you all the stories yet; at least not the way I normally would. 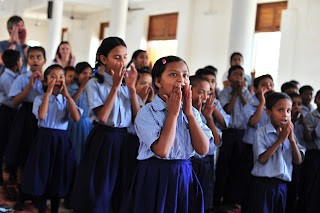 I’m not chasing after the perfect sentence. 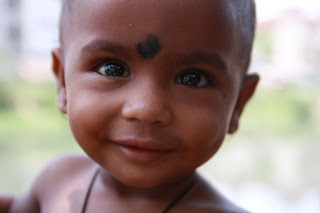 I may not check for grammatical errors. 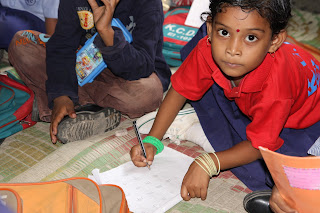 I might be a little bolder than I thought I might be in asking for your help.

Because today, I walked into a house made of woven straw, covered with newspaper. It was roughly the size of the smallest bedroom in my house and five people live in it. When asked what she wanted to be when she grew up, the little girl who lived there replied quickly in Bengali, “I want to be a doctor so that I can help the poor and needy.”

I saw stacks of letters sitting on Compassion office desks, waiting to be translated, each one carefully documented. I met the people who spend their time making sure that everything that is sent for a child is given to him or her, and the complete dedication of the people behind the scenes. I was completely in awe of the time it must take to translate all of those letters and the intricate system Compassion has in order to ensure that everything is in order and running smoothly. 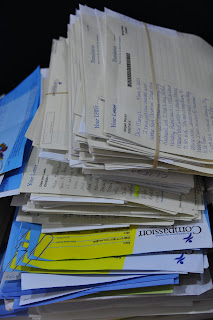 I saw what happens when people decide to give, even in spite of the fact that they may never get to touch it in this life.

And it is nothing short of a miracle.

Here is a glimpse into the joy I got to experience, and the great honor of sharing three words with my husband that he has never heard before… 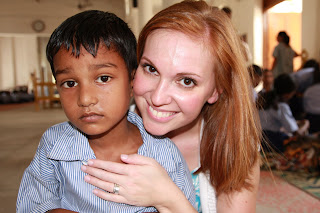 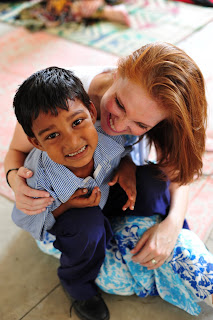 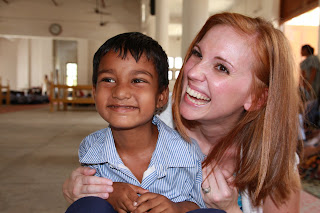 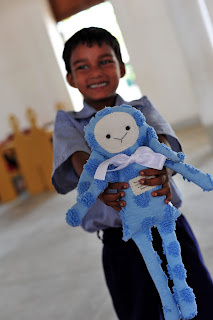 Love to you all~
Ang